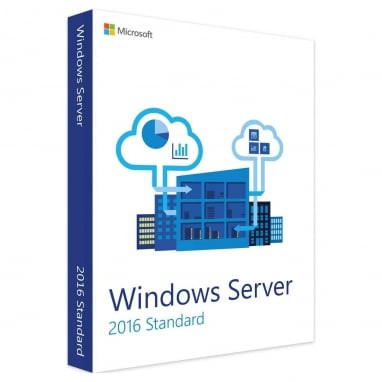 *Symbolic picture: Products are not delivered physically, the activation key is sent digitally.

Windows Server 2016 is the cloud-ready operating system that supports your current workloads while introducing new technologies that enable the transition to cloud computing when you're ready. The following information provides an overview of the editions and activation options.

Customer reviews:
Nobody has posted a review yet
Payment:
Old price:

All you need is just to buy your desired Software and you’ll immediately receive an email with your Activation Key and a Tutorial. Now complete installation process of your software according to our pictorial step-by-step instructions and Activate it with the Activation Key.

Why is it a good buy?

At our shop You can buy original software keys at reasonable prices without saving on service. Should You, despite our detailed instructions, encounter any problems, our IT experts will of course be happy to help You in the live chat or by e-mail. If necessary also assisting and solving Your problem by remote maintenance!

Also You are on the safe side with our products. Within the scope of our commercial examination obligation, we regularly check the goods offered for their quality.

Are there any questions about the products offered or do You need an individual offer? Simply contact us using the contact form or our live chat and we will be happy to help You with Your selection.

For commercial customers, authorities and schools we also gladly advise individually all around Your software purchase.

Be the first to write your review !

What you need to know about requirements?

Here you will find an overview of the most important requirements and product details. Please check them before buying to avoid installation problems.

Windows Server 2016 Standard was developed with respect to servers at your site. If you use fewer servers and fewer or no virtual servers, this operating system is perfect for your needs. The software is also powerful enough to manage even large networks without having to upgrade to the much more expensive Datacenter Edition. The activation model works by paying the cost per CPU core. The acquisition costs can therefore be easily calculated in advance for companies. Activation costs for at least eight cores are incurred per CPU, but Windows Server 2016 Standard can be adapted to an increasing number of CPU cores as needed.

In addition to the functions mentioned, such. For example, with improved speed and cloud connectivity, you can assign user rights to your employees using Windows Server 2016 Standard. This allows a secure administration of the entire server system without much effort from any location.

In addition, the software offers the possibility of starting the system in a particularly simple variant, the core application. This server does not have a graphical interface, which significantly improves performance on older devices. In addition, the system requirements that the system places on external devices are decreasing.

To make applications faster and more flexible, Windows Server 2016 Standard also relies on familiar Windows installers. You can not fully use virtual machines with this server OS, but a way out is available in Datacenter Edition.

Features and functions of this server operating system are aimed primarily at small businesses that can not or do not want to invest as much money in their IT. At these sites, Windows Server 2016 Standard meets all the requirements for distributing data between different computer systems. The result is a constantly-available, easy-to-extend server that provides all the resources you need, even on a budget.

Our shop is using cookies to ensure a pleasant shopping experience. We are saving your shopping cart, login sessions and more.